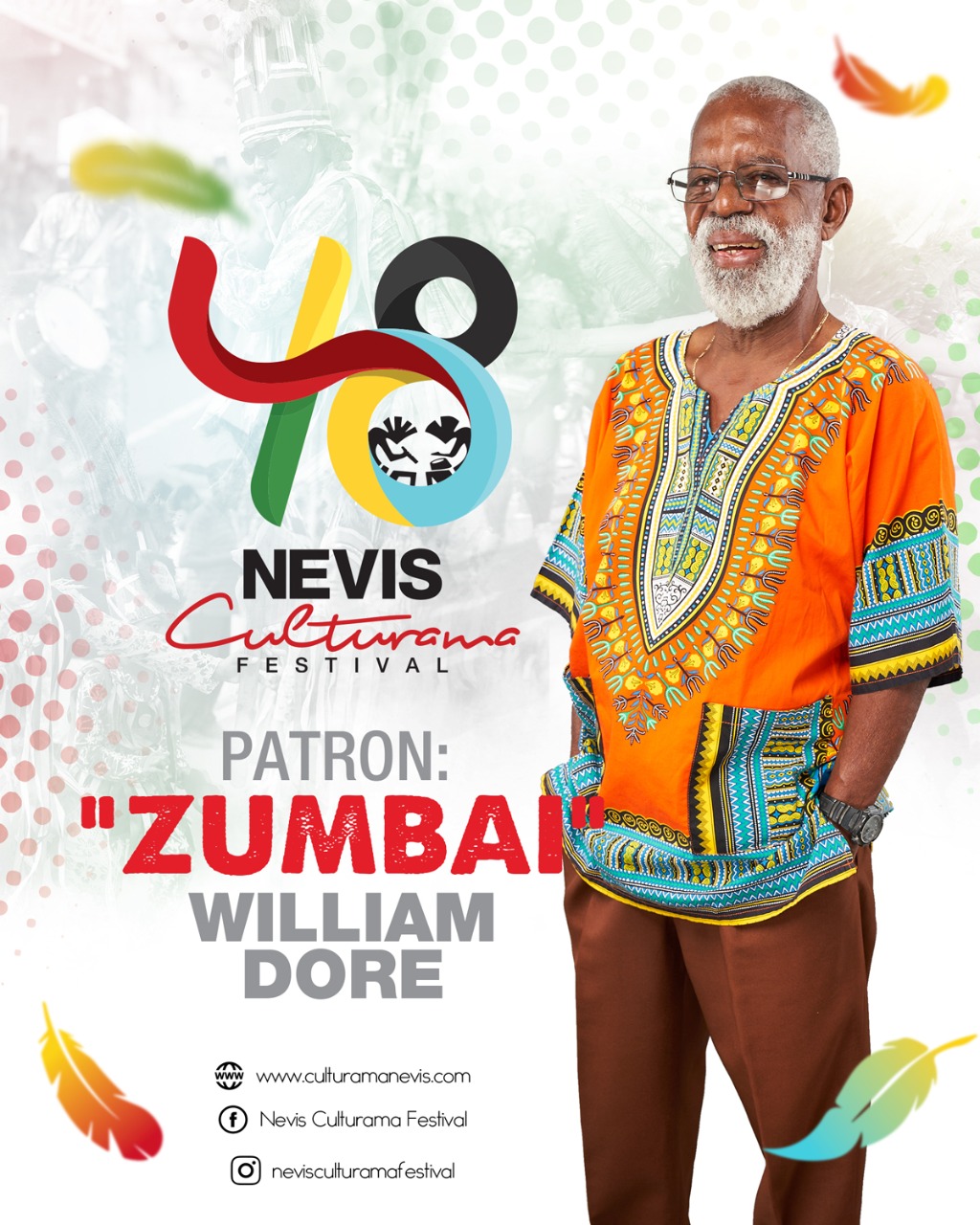 William Wentworth Dore affectionately known as “Zhumbye Di Ggii” was born on November 28th 1948 to Lucina and the late Ralph Dore. He is the second four children.

Young Zhumbye grew up with his family in Charlestown. He first resided at Happy Hill Alley and some years later his family moved to their present home at Low Street in the building that now houses the Harlem Shelter Bar & Lounge.

A day in the life of young Zhumbye saw him picking ‘hog meat’, heading water and going to school. He enjoyed playing his favorite sports which were cricket, netball and football. He also enjoyed hiking and drama.

Zhumbye developed a love for drama while in high school and played many roles such as Shakespeare and also as a comedian. Irrespective of the role he played, he enjoyed them all. It was because of his love for drama that upon leaving school he joined the Nevis Dramatic and Cultural Society (NEDACS) to follow his dream of becoming an actor.

Zhumbye enjoyed listening to the calypsos of the day that were played on the radio. It was therefore no surprise that Zhumbye developed a love for the Calypso art form. He was particularly fond of the Mighty Chalkdust’s style. He liked the wit, the slow cadence and the topics that Chalkdust would sing about. In 1972 Chalkdust released a song Juba Doo Bai and Zhumbye thought that the title sounded like a really good name for a calypsonian and so he created his moniker, ZHUMBYE DI GGII from the song.

Zhumbye became a fervent participant in the Carnival Calypso Competitions that were held during the Christmas Festivities on Nevis. Two of his most popular songs were ‘Granny’ which was based on a true story and ‘Where do we go from here’. In fact, in 1974 “Where do we go from here” won him the Carnival Calypso crown on Nevis. This win was however tainted with controversy as the song was immediately banned because of its lyrical content which criticized the then Premier, Robert L. Bradshaw, for not allowing Nevisians the right to have more control over their spending the opportunity of self-governance. In Zhumbye’s opinion, Nevisians were very talented, capable and qualified to handle the affairs of Nevis.

The Christmas Festivities on Nevis precipitated the formation of the Bazzard Boys which was comprised of characters such as Zhumbye, Bahowlah, Shacks and others. They wore the most outlandish costumes such as dresses, and powdered their faces. They travelled throughout the island entertaining the residents with ‘toasts’ which were performed by singing poems about well-known events and characters in society. These toasts went from tame to quite harsh at times. The Bazzard Boys were often times accompanied by a String Band. As a show of appreciation for their performances they were rewarded with food, drinks and or money. The monies collected were most times enough for the Bazzard Boys to organize a big party among themselves at the end of the Christmas season.

The Bazzard Boys have continued their serenading up to this present day and have participated in the Culturama Cultural Street Parade for many years. They always stood out during the Parade because of their garish costumes and their antics. Zhumbye comments that up to this day, his two greatest joys of Culturama are the Street Parade and the Senior Calypso Contest.

On Culture and Culturama, Zhumbye opines, “Culturama is our thing, and we must expect that it would get bigger and bigger. Some say that we are getting out of the cultural aspect of it, but I however do not subscribe to that because if you stay in the cultural aspect of it you’ll be doing the same thing every year, so we have to move up, move forward and as a matter of fact, whatever you do, whatever you portray, whatever costume you build, it’s your culture and so I have no problem with it getting bigger and bigger”.

Zhumbye now spends his days as the proprietor of the Harlem Shelter Bar & Lounge and taking care of his mom Lucina. Zhumbye is also the owner of the world famous ‘Zola Troll Doll’ that also resides at the Harlem Shelter with him. Zola is steeped in mystique because whenever she was present at Grove Park during those fiercely fought cricket battles between St. Kitts and Nevis, she was credited with giving the Nevis Cricket Team several wins over St Kitts. Because of this, Zola was loaned to many persons to accompany them on their travels all over the world.

Zhumbye’s advice to the youths is that he would like to see them get more involved with poetry, plays and designing. He says that he wants them to think big and think special, be unique and then build on that foundation.

In his parting words he said “I just love Culturama and would do anything to keep the Culture alive.”